I’m back! We’re back from America, so this week’s recipe doesn’t come from there, like my last three have. This one is actually Italian, and though the title states it’s a soup, it’s more of a stew in my opinion.

I made this as a warming lunch option to take to work. It serves 6 people and is fairly simple to make. It’s very filling, but that could just be the way I portioned it out!

I also made a fairly big mistake whilst making this, but it all ended up okay in the end….

You start with adding a little oil into a large stock-pot and adding 1 small white onion (diced) and fry for about 4 minutes. Add 1 cup of diced carrots, 1 cup of diced celery and 2 cloves of minced garlic. The recipe called for 3 cloves but I didn’t want that much. Saute this for an additional 3 minutes. This was where I made my mistake, and just forgot to put the carrots and celery in. I know, I know – weird but I did it.

So that’s the onion and garlic, minus the carrot and celery. 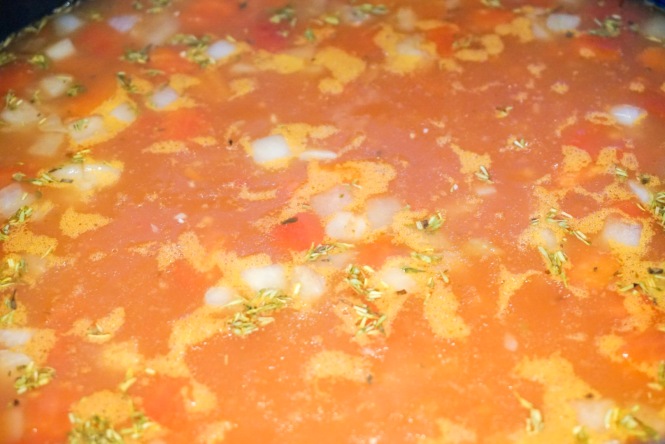 I brought this to a simmer, and turned around in the kitchen. There behind me on the kitchen island was a lovely bowl of diced carrots and celery. DOH!

So I plonked them all into the pot too, and hoped for the best!

This was brought to a simmer, then the heat reduced to medium-low and simmered for 10 minutes (or until the pasta is al dente), stirring occasionally.

Then I added 4 cups of spinach leaves.

Stirred all together, I then tasted the pot and added 1.5 tsp of sugar, salt and pepper.

This was cooked for 2 minutes and it was ready!

At this point it looks like there’s a lot of liquid, but there’s so much veg and pasta in there that I felt like it was more of a stew type consistency.

I don’t think the soup suffered from the mistake I made. The veg was cooked through enough, but who knows, that could have contributed to a lack of moisture in the soup.

This soup was really flavourful. It filled me up on each occasion I ate it, and I felt like I was getting a good healthy balance of vitamins and minerals from the rainbow of ingredients I was eating.

This was a really nice soup, and it will make a lovely addition to my home cooked work lunch ideas. I’ll most likely make this again, down the line, and I can see it being really nice and warming in winter and spring.

Hello and welcome to groggits.com! I'm Erin (aka Groggits) and I created Musings of a So-Called Shutterbug back in 2009 as a lifetsyle blog. Over the years I've written about music, fitness, travel, beauty and pretty much anything else you can think of! I hope you enjoy reading my articles - please feel free to subscribe.

If you wish to contact me, please do so at socalledshutterbug@outlook.com