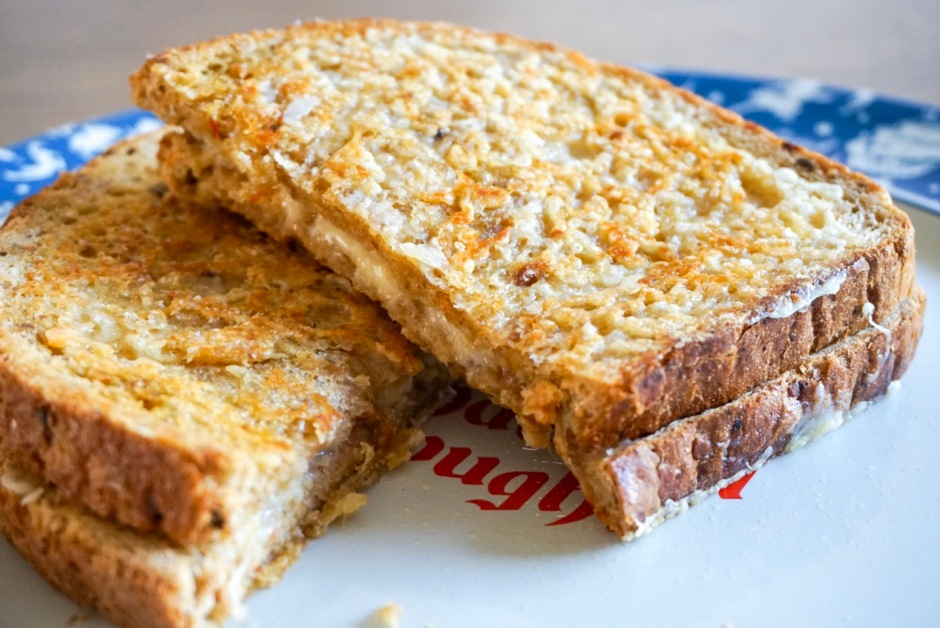 In the UK we have toasted cheese sandwiches, traditionally made in a sandwich press contraption, that’s usually so hard to clean after use that it’s makes more sense to buy a new one each time that try and get it clean. In the US they have no such problem – they make grilled cheese sandwiches and they are made in a skillet or frying pan. Simple, quick and much easier to clean up. I started making my grilled cheese sandwiches this way a few years back and it’s the only way I’ll do it now. They’re called ‘grilled’ cheese because in America when you ‘grill’ the heat comes from below, as opposed to in the UK where when we grill something the heat comes from above. (Think BBQ grill and you’ll get the idea)

Now, I know what you’re thinking – grilled cheese – that’s not a new recipe. But bare with me. I spotted this recipe over on smittenkitchen (yes her again!) and thought to myself “the only thing you can do to make a grilled cheese better is…. MORE CHEESE”.

The thing that makes this grilled cheese BETTER is the addition of a small amount of cheese in the pan before the sandwich goes in. This creates a crust of that crispy, cheese, lacy melted cheese on the outside of each side of the sandwich. This thin lacy, crispy layer of melted cheese is also known as Frico.

So, to make this epic grilled cheese you start of with some decent bread. Thick but not too thick. I ALWAYS make my grilled cheese with sweet chilli sauce inside. I love how the sauce mingles with the mature cheddar flavour. It adds beautiful sweetness and slight heat, which cuts through the cheese. 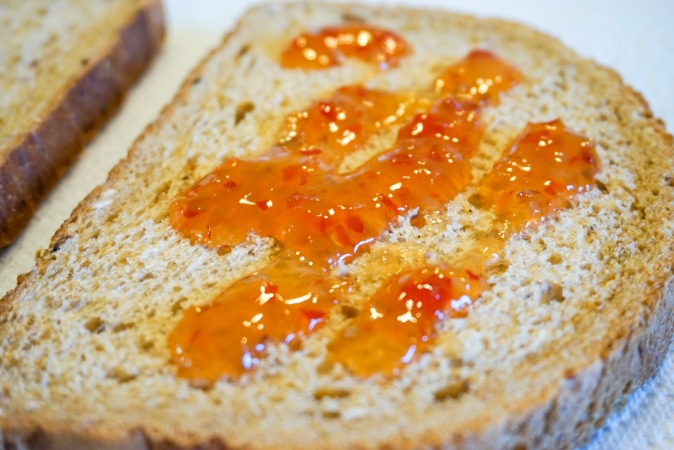 I put about that much on the bread and spread it out evenly. 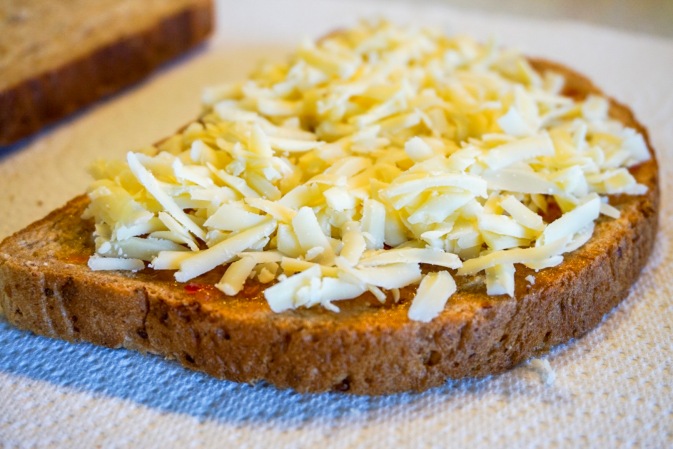 Then as much grated cheese as you want, but bare in mind this has to melt evenly. This is why grated cheese is more effective as the surface area of the cheese bits are smaller. I used lactose free mature cheddar.

Then top this with the other slice. At this point, I use a spoon to spread a fairly thick layer of butter (I use Vitalite) on the outside of the top slice. I say to use a spoon to do this – I’ll explain why in a minute. 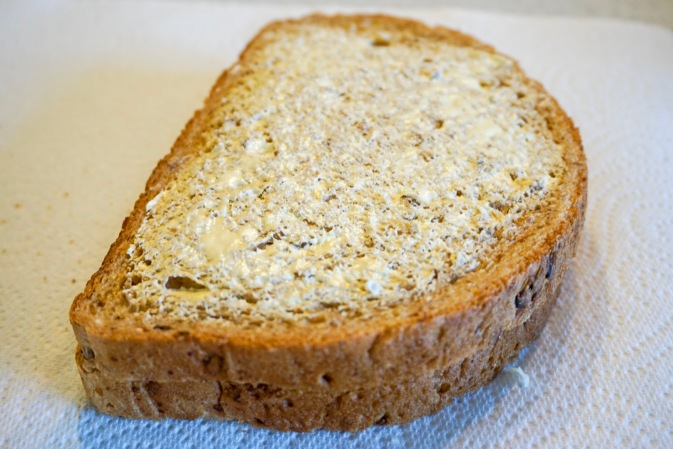 The next step is the warm the pan on a low-medium heat. Now the Smitten Kitchen recipe says you use 1 tbsp of grated cheese next, but I didn’t think this was enough so I used 2 tbsp (I was right).

You sprinkle the cheese into the pan, right where the sandwich is going to go, and the place the sandwich, butter-side down on top of the grated cheese. 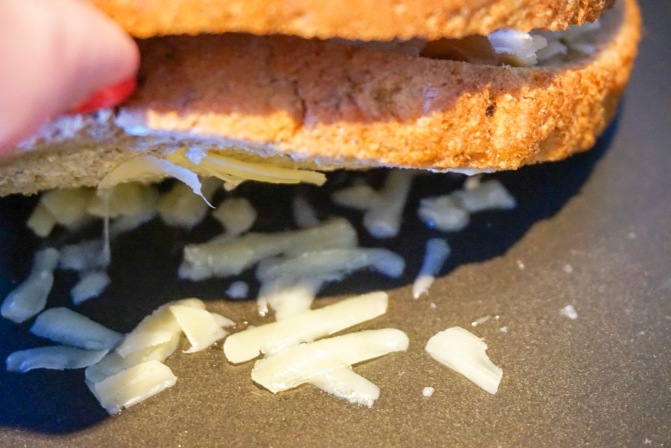 Now remember I told you to use a spoon the spread the butter earlier? Here’s why. You now have a sandwich slowly grilling in the pan, but the side that’s facing up has no butter on it. I don’t like to butter both sides when prepping because you’re left with a buttery sandwich you can’t put down anywhere. Once it’s in the pan, you need to butter the side that’s now face up. But if you use a knife in a frying pan, it’s hard to get the angle you need to spread it. Enter: THE SPOON! It’s perfect for spreading at an angle and you’re not going to accidentally touch the hot pan. You heard it here first. 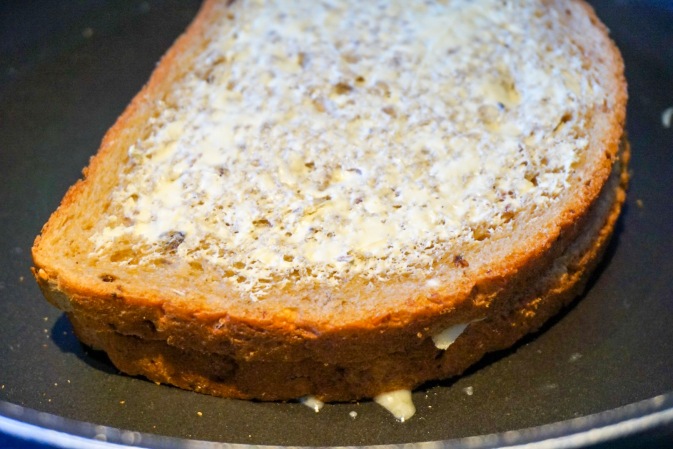 You’ve got to let the sandwich fry in the pan until it’s golden underneath and the cheese browns and fricos. This is about 4 minutes. Then you lift the sandwich up and out of the pan with a spatula, sprinkle 2 more tbsp of grated cheese on the pan and flip the sandwich over on top.

Cook this until that side is brown and crispy, pressing down with the spatula to encourage all the cheese inside to melt together. 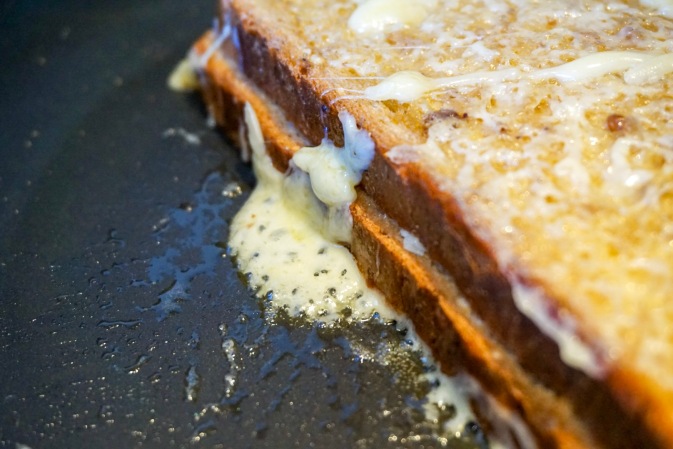 I always cut mine in half because it’s HOT in there. 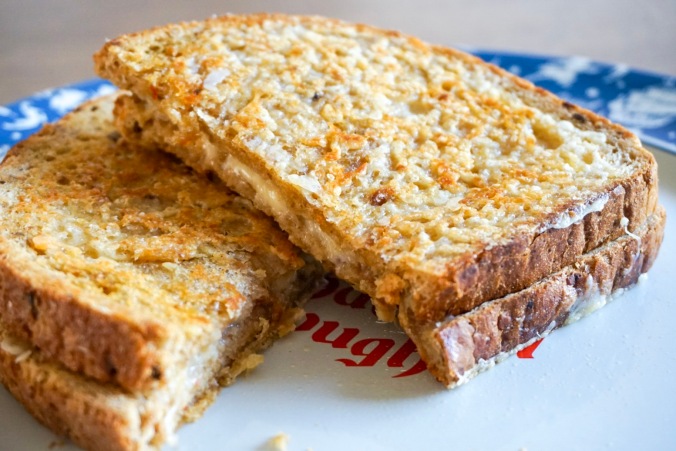 As you can see, the outside is crisp and the cheese has created a wonderful Frico crust. 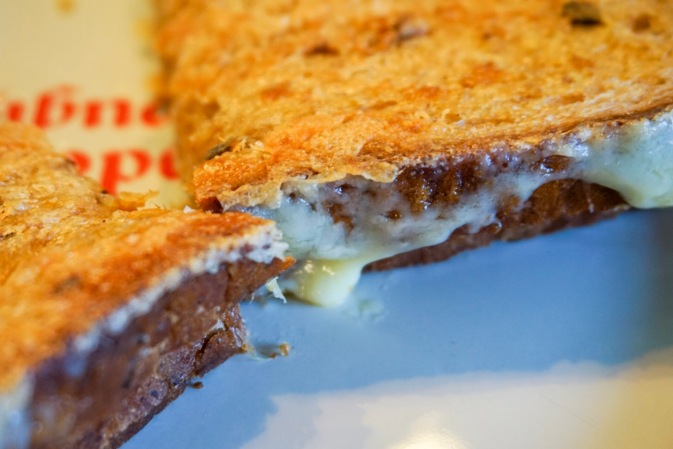 The inside is still melty, but the outside is that wonderful strong and crisp cheese flavour. 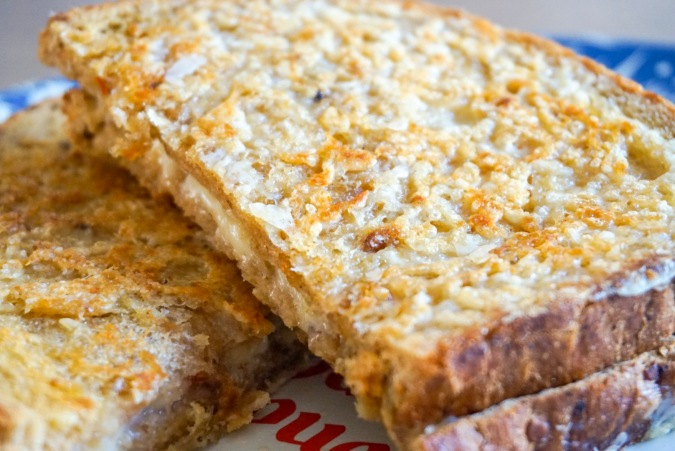 I won’t mince my words when I say, this was the best grilled sandwich I’ve ever eaten. 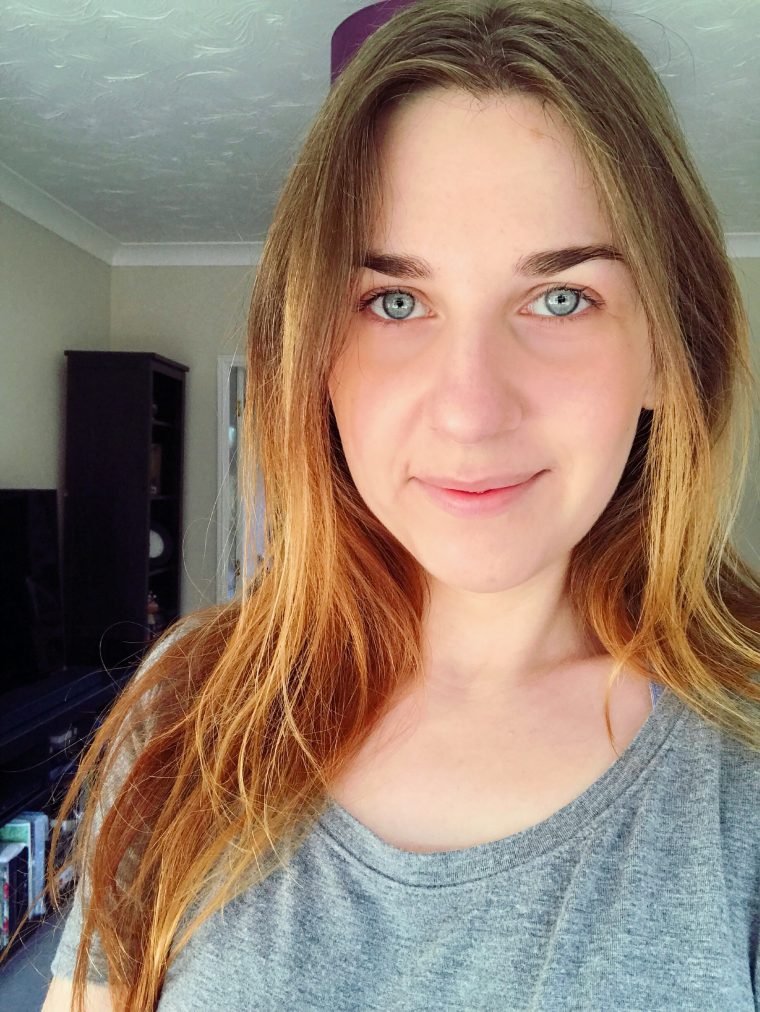 Hello and welcome to groggits.com! I'm Erin (aka Groggits) and I created Musings of a So-Called Shutterbug back in 2009 as a lifetsyle blog. Over the years I've written about music, fitness, travel, beauty and pretty much anything else you can think of! I hope you enjoy reading my articles - please feel free to subscribe.

If you wish to contact me, please do so at socalledshutterbug@outlook.com